To protect your data from unauthorized access, Bloomreach Engagement has developed Role-based access control. Having the access minimization principle in mind, this system allows you to make sure that only the right people have access to personal data or specific modules.

With Bloomreach Engagement, you can define and manage dedicated persons with specific permissions, such as to modify, view, or export customer data and execute campaigns. You can set separate access with the explicit purpose for each user either on a project or account level.

To do this go to Settings > Project settings > Access management where you can select from, assign, and modify specific access rights.

Note that in each project there is a limit of 1000 users.

Role-based access control groups small sets of certain permissions and accesses under "roles" that can be assigned to team members by the Admin. This way, administrators are able to decrease the risk of major mistakes and security breaches by carefully restricting the access of the users to perform only the tasks that they really need.

You can invite new users to your project and decide, which role is suitable for their work, as shown on the picture below. They will have to accept your invitation, and until they do so, they will appear within pending invitations.

The invitation is valid for 7 days for security reasons. After this time, the invited user will no longer be able to accept it and the administrator or superadmin has to resend the invitation.

You can make changes to the specific role and permissions while the invitation is pending, and you can further refine user accesses even after the invitation has been accepted. Thus, do not worry if you accidentally invite someone with an incorrect role or permissions, as the role can be changed anytime by the Project Administrator.

Once the user is in the project, you can adjust their project role by hovering over their name and clicking on the Edit button on the right side in the Project team tab. Here, you can select multiple roles from a list of roles (some of which are described in the table below). There are several roles predefined by Bloomreach Engagement, and you can also create your own custom roles to suit your specific needs.

You can assign multiple roles to each user by scrolling down his or her individual access permission set up and selecting add role group. Then, in project team you can see all individual roles and their descriptions under that person´s name.

The administrator can grant the user a temporary role by setting an expiration date in the user interface. Select the icon Add expiration and select the exact day and time that the user´s role will expire. Expired roles are visible in the interface, but are not active and do not grant any permissions. We recommend setting expiration for highly sensitive roles, such as Admin roles and Personal Data Viewer.

There are several access roles in Bloomreach Engagement out of the box. To make it easy for you to quickly understand the scope of the role, all of them abide by the following naming convention: The first word or two represents the section of the application, and the later the extent of the permission.

When it comes to the extent of the permission, there are levels of roles with an increasing set of permissions, creating a kind of hierarchy of roles, as described in the flowchart below. Higher-level roles inherit all permissions from lower ones and lower levels never allow functions from higher-level roles. For example, while an Admin has access to all other functions, sole Editors cannot publish or export from Bloomreach Engagement (they can only do the task they are assigned and abilities hierarchically beneath them). All standalone roles follow this hierarchy and naming. 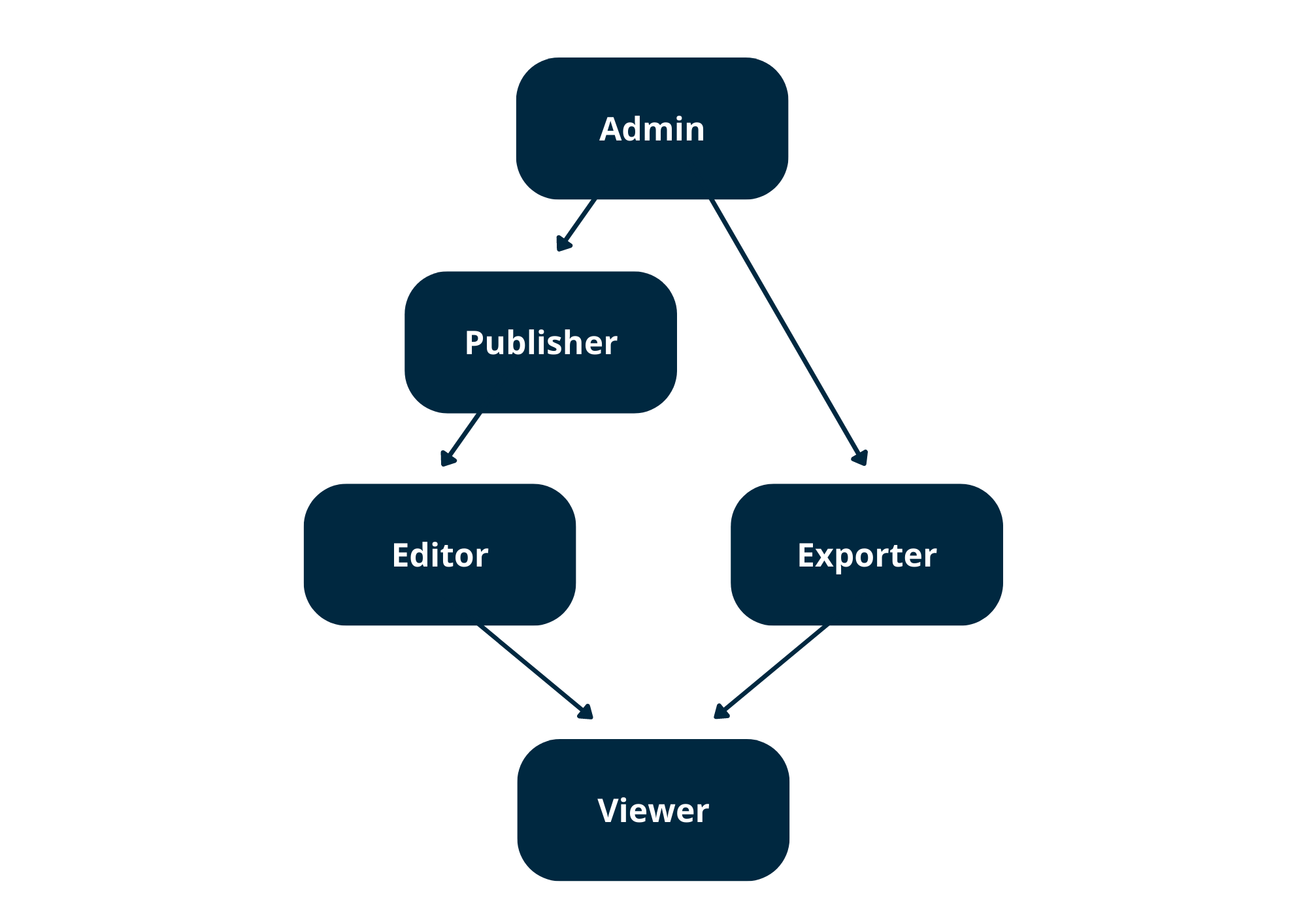 Admin: has full access to data, objects, and settings; can change settings that impact wider scope; can manipulate customer consent; can edit and delete data in bulk.
Editor: can write and delete access; can modify and delete objects.
Publisher: can execute access; can trigger an action that may have an immediate impact on the end customers or make objects publicly available.
Exporter: can export or download data from the Bloomreach Engagement application.
Approver: can only approve specific actions.
Requester: can create a request.
Viewer: read-only access; cannot modify objects.

Be aware of the hierarchy between Instances, Accounts, and Projects. Roles granted on a higher scope (account) are applied to all lower scopes (project). Similarly, if users operate on their own private instance, that instance has the highest hierarchy (instance -> account -> project) 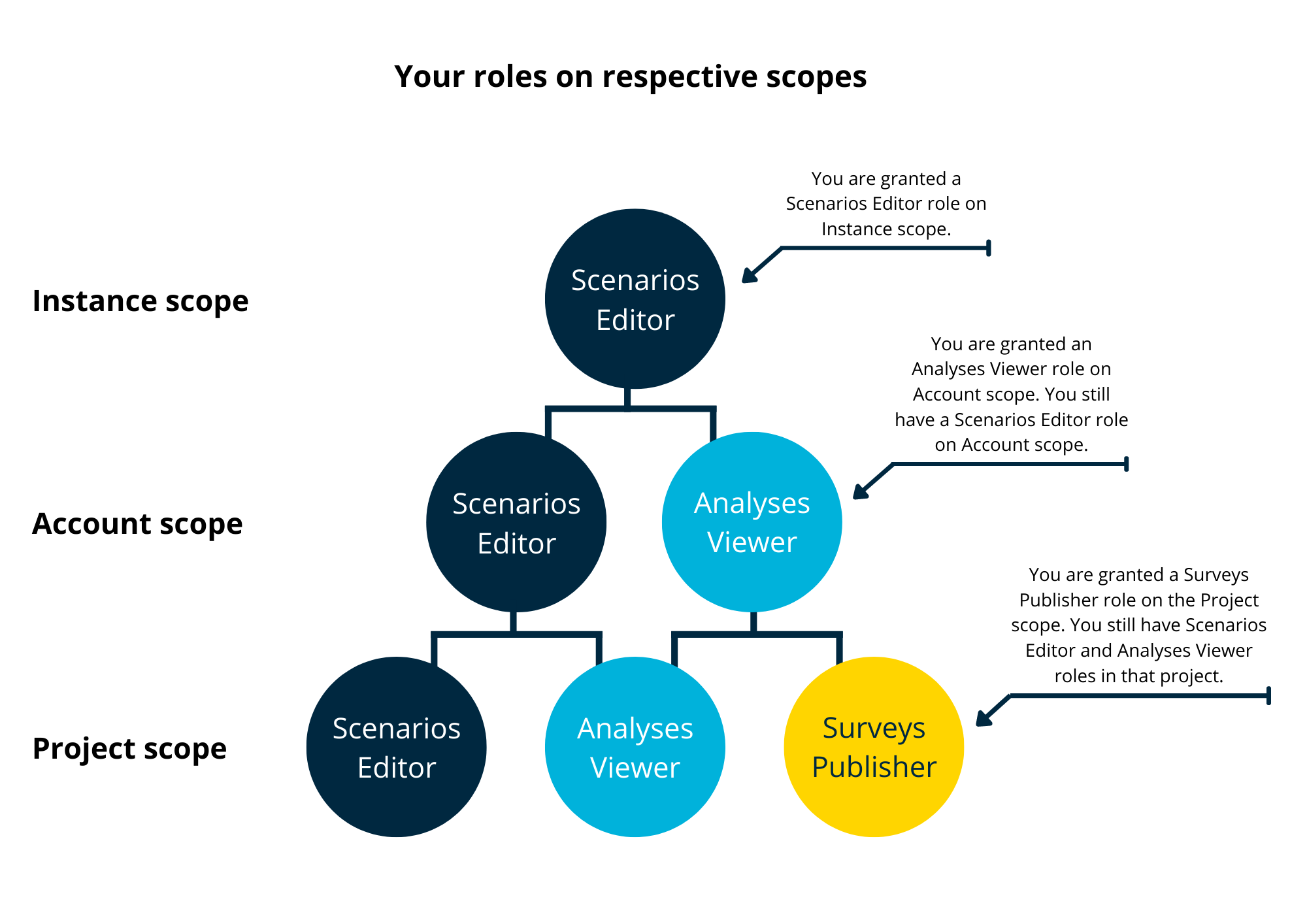 Ensure Project Safety by granting a role on the correct Scope

There are several predefined standalone and non-standalone roles that come out of the box and that can be assigned to the members/users of your project. All standalone roles follow the naming and hierarchy of roles described above. In addition to those, there are several non-standalone roles set up by Bloomreach Engagement that allow access to specific actions. Remember, a user can have multiple roles assigned, but each user must have at least one stand-alone role to be able to access the project. The following is the list of all predefined roles in Bloomreach Engagement.

To read more about the roles and see which specific roles are inherited, find the role in Access management -> Roles

Bloomreach Engagement offers three main types of instances for your projects: shared, private and exclusive instance. These contain different features and configurations of data layers. In each of these instances, data is separated and access management is enabled to ensure your security. You can learn more about our Security architecture in its separate article.

What is important for Access management, is that the additional layers of security within the more sophisticated types of instances, such as the private or exclusive instance, will require some additional roles and accesses or permissions compared to the shared instance. For projects running on a private instance, there are these additional roles, as described in the table below.

Bloomreach Engagement allows you to assign finely detailed roles to your project members, not limiting you to choose from broader predefined roles listed above. Remember, a user can have multiple roles assigned, but each user must have at least one stand-alone role to be able to access the project.

While there are roles predefined by Bloomreach Engagement, you can set up your own custom roles. This allows you to add and combine several inherited roles to create a single role that would suit your specific needs. In other words, custom roles are stacked from predefined roles and inherit all their permissions and scope level.

To do so, go into project -> roles -> + Create custom role in the right top corner. Select + Add inherited role.

When there is a team with the same responsibilities and permissions operating the Bloomreach Engagement application, we do recommend creating a custom role. This custom role would inherit all required roles - allowing you to then only assign this single role to all team members. Furthermore, this makes it easier to see who is currently a member of this role on the Custom role's Members tab.

Custom roles (user-defined) can be combined from multiple roles, but it's not possible to remove a permission from a particular role.

When user roles are changed, there is a small delay before the new permissions are applied. Be aware that permission changes are not applied immediately – it may take up to 1 minute to propagate changes into all components. If you are still getting the error after waiting a few minutes and reloading the application, and you think you should have access/permissions for this action, please contact our support.