You can preview segmented results by adding an API Modifier in the Dashboard. There are two types of API Modifiers: persistent and temporary.

While previewing segmented results, any merchandising rule you make still apply to all results (that is, all segments). If you need merchandising rules to be created for a specific segment of users, we recommend using the Targeting feature instead.

To set the persistent API Modifier,

The API Modifier Active message can also be seen in your Ranking Diagnostics, as shown below:

You can delete an API Modifier you do not wish to use.

To delete the persistent modifier,

You can set a temporary API Modifier within the product Preview grid or from Ranking Diagnostics. This can be set when you are merchandising a specific query or category.

To set a temporary API Modifier: 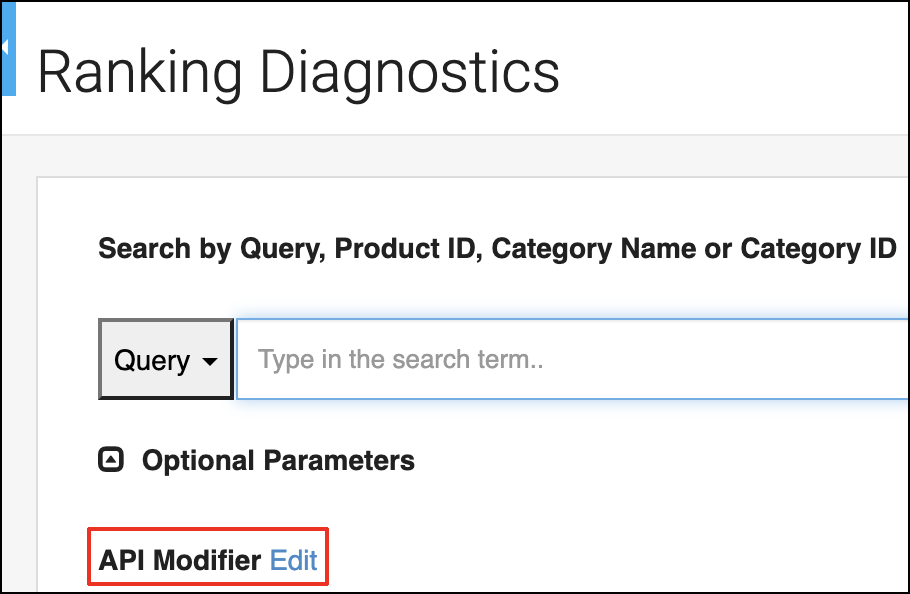 No, API Modifiers only affect previews in the Dashboard, and require the Relevance by Segment feature to be enabled. If you are interested in this feature, please reach out to your Bloomreach representative or Support to help set this up for you.

No, the current metrics in the product grid will remain unchanged and will not reflect the current segment being previewed.

The Performance score will incorporate Relevance by Segment data and will change when an API modifier is added. Since Total Score includes Performance & Relevance, this will also impact Total Score.

The Custom API Modifier accepts any parameter that you would like to append to the Dashboard Preview API. Invalid parameters will cause the API to fail (and thus impact your Dashboard previews), so we recommend consulting with your Bloomreach representative before using a Custom API Modifier.