As a merchandiser, you can manage multiple versions of your site in the Bloomreach Dashboard. You accomplish your tasks in the same way as for single-version sites, but with a few choices that single sites don't have. These choices let you propagate your merchandising changes across all site versions or a set of versions. You keep the flexibility of overwriting changes at the site-specific level. Before we go any further, let's define some basic terms that will help you understand multi-site management in the Bloomreach dashboard. 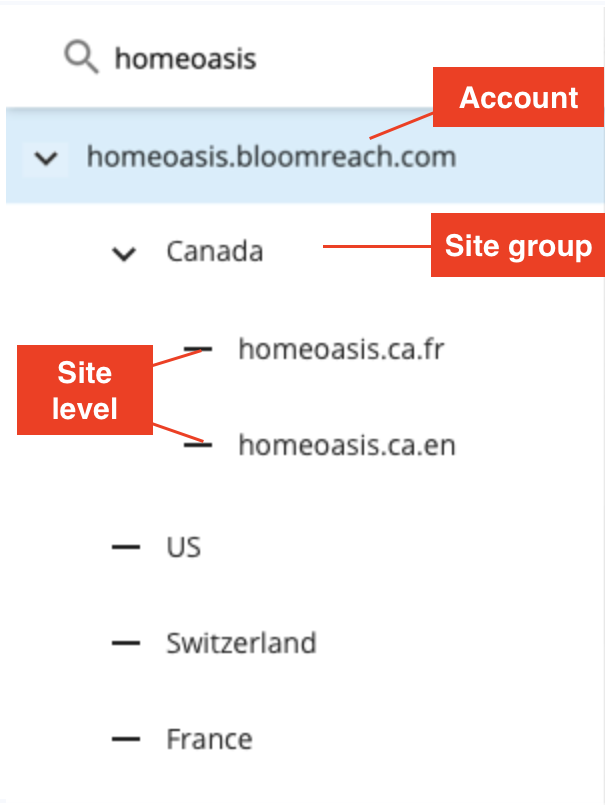 Who may have multi-site support in the Bloomreach dashboard?

What are some examples of how Bloomreach supports multi-site management?

Multi-site: Blocking a product across a set or all versions of your site

If your site has different versions that have the same structure and a similar product catalog for different regions, languages, or brands, we call this "Multi-site". For example, if you have a site that has a version for English and another version for French, then you have a multi-site.

As a merchandiser, you can manage multiple versions of your site in the Bloomreach Dashboard. You accomplish your tasks in the same way as for single-version sites, but with a few choices that single sites don't have. These choices let you propagate your merchandising changes across all site versions or a set of versions. You keep the flexibility of overwriting changes at the site-specific level.

Some sites offer merchandise that they don't necessarily want to show for particular search queries. Merchandisers can create blocklist rules to exclude these products from search results for specific queries.

She starts by selecting the global Homeoasis site from the dropdown list in the upper right corner of the Bloomreach Dashboard. The global site is at the top of the list. 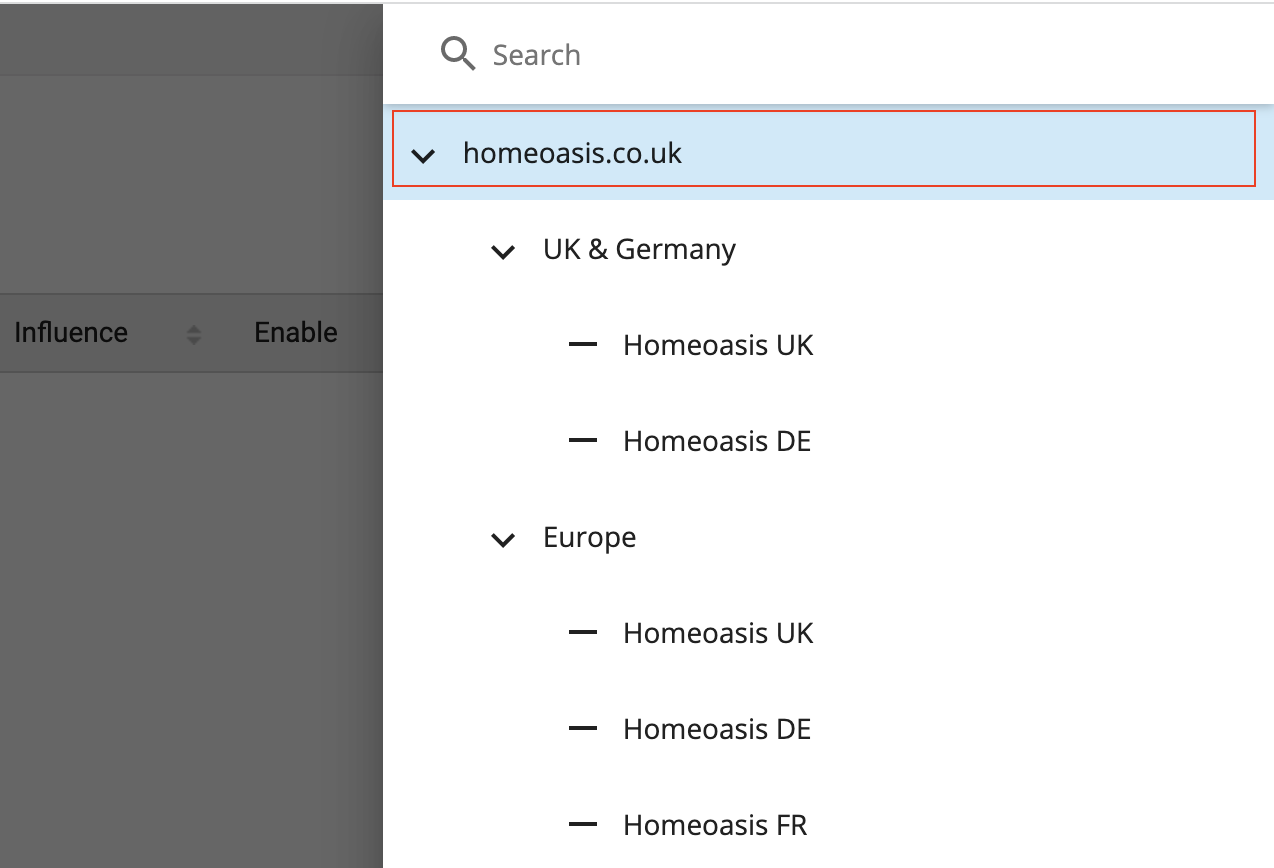 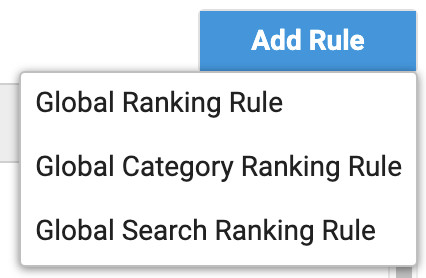 She clicks the Add Rule button and selects Global Search Ranking Rule, then continues creating her blocklist rule the same way as for a single-version site. When she's done, her new global search blocklist rule applies to all versions of the Homeoasis site.

Boost a product on a set of sites

Suppose Molly wants to boost the product, Very Shiny All-Purpose Surface Cleaner, on two versions of the Homeoasis site. These two versions are in a group called UK & Germany.

She starts by selecting UK & Germany from the dropdown list in the upper right corner of the Bloomreach Dashboard. 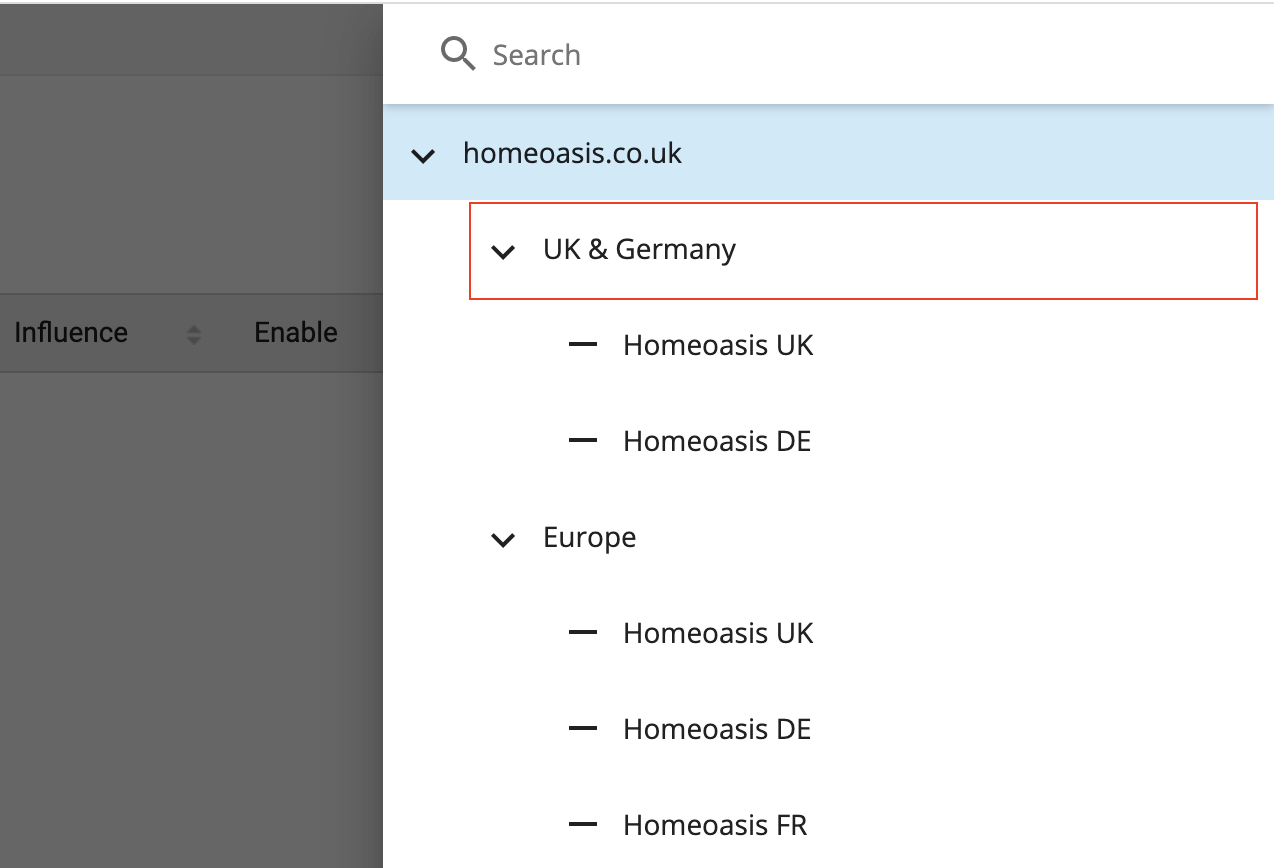 Ezra opens the Ranking page, which is the same starting point that single-version sites use: Setup → brSM global configurations → Global ranking rules. She clicks the Add Rule button and proceeds the same way as for a single version site with a few exceptions:

Searching for a site in the dashboard dropdown

If you have a long list of site versions or groups of site version, then you might find it easier to find the site or group with the search box rather than scrolling through the list.

If you’re using a multi-site account, you’ll have separate catalogs for each of your domains. Each catalog comes with its own set of attributes.

At the site level, creating ranking rules is straightforward as the attributes, attribute values and categories appear according to the site catalog.

The situation is a bit different for attribute values and categories at the account level.

At the account level, attributes/facets are aggregated across all catalogs (domains). But there is no such aggregation for attribute values.

Here we are using catalogs and domains synonymously since each catalog represents a domain and vice versa.

Let us understand this with an example.

Suppose you have 2 different sites for English and German languages.

The catalogs of these sites have the following attributes:

All the attributes (is_new, color, and size) will appear in the ranking editor. This is because attributes/facets are aggregated from both catalogs.

However, attribute values are not aggregated.

In the above example, the attribute is_new is common between the English and German domains. It has the same attribute values but in different languages.

In the ranking editor, you may see either (Yes, No) or (Ja, Nein) as the values for the attribute is_new.

You will not see all the attributes values (Yes, No, Ja, Nein) in the editor. This happens because there is no attribute value aggregation.

There is no default catalog for attributes so the values are selected arbitrarily.

Suppose there are the following categories at different levels:

In the category ranking editor, you may see any one of the categories (dresses, tops) or (jeans, hoodies).

As there is no aggregation for categories, you will not see all the categories (dresses, tops, jeans, hoodies) in the editor.

On the account level, the attribute values and categories displayed do not usually change over time.

Since there is no attribute value/category aggregation, you might not be able to merchandise products with these attributes/categories on the account level dashboard.

To overcome this, we recommend that you create a site group to group sites based on your use case, and set up ranking rules on the site group level.